In our previous blog, we discussed the importance of healthy gums. From preventing cardiovascular disease and diabetes to overall tooth health, having healthy gums is one of the most important things you can do for your health as a whole. It’s easy to think that the path to healthier gums is as simple as flossing, and flossing of course plays a huge role in gum health, but there are many factors that play into ensuring you’re taking the best measures possible.

Take some tips from the expert—Dr. Mojgan Mazhari is Alexandria’s trusted dentist and periodontist providing the best in dental care. Learn more about the best practices for healthier gums, and schedule an appointment with Dr. Mojgan Mazhari today! 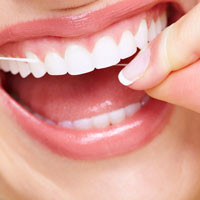 There’s a reason dentists bring up flossing time and again. It’s one of the most vital ways to address gum health. Dentists recommend flossing daily, and more specifically, before going to bed. This is the best chance to get all the plaque buildup that has happened throughout the day. WebMD provides a description on how to best floss: “Use a piece of floss 15 to 18 inches long, slide it between the teeth, wrap it around each tooth in the shape of a ‘C,’ and polish with an up and down motion.”

Sometimes there can be barriers that deter people from flossing on the daily, but this shouldn’t be the case. If you have braces, a permanent retainer, or something that else that makes flossing difficult, you can find floss that has a hardened end to get through easier. As one example, dentists often have loops that can pull regular floss through to make flossing easier.

Additionally, it’s totally normal for your gums to bleed a little. If the bleeding persists after several days of consistent flossing, this might be a sign of a bigger issue (like periodontitis), but this is part of the transition to getting your gums to a healthier state.

Brush (but don’t scrub) your teeth. 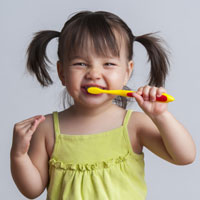 While this might seem like it goes without saying, it doesn’t. In fact, the ADA reported that as of 2014, “23 percent of Americans have gone two or more days without brushing their teeth in the past year. Nearly 37 percent of adults ages 18 to 24 have gone that long without brushing.” Make sure you brush your teeth at least twice daily, for two minutes each time.

All this talk of gum disease can make us feel the need to neurotically scrub our teeth with a toothbrush in attempts to get rid of plaque buildup, but this can actually make matters worse. If gums feel like they’re being attacked, they can retreat and start to recede, which can lead us even more susceptible to gum disease. Brushing lightly, with light pressure applied, in circular motions, and flossing before bedtime can do wonders.

Drink water after every meal.

It sounds simple enough, and is a really good practice for health in general. By drinking water, you’re actively washing away some of the food buildup that takes place when you’ve consumed that amazing seven-layer lasagna, or that summer-sweet corn on the cob. Particularly if you’ve eaten something sweet, it’s a great idea to drink some water right after, as sugar can contribute to some of the worst forms of plaque buildup. Many dentists also recommend swishing around water in your mouth to do the best possible job.

Ideally, you would brush your teeth after each meal or use a mouthwash that contains fluoride, but we don’t always have the time or the means to do this. Water is definitely an alternative that can help maintain healthy gums after you eat.

In addition to drinking water after you eat, stick to water after you exercise as well. Sometimes after an especially intense workout, the idea of a sports drink sounds way better than plain old water. Yet as many sports drinks are high in sugar, this is attempting to quench your thirst while wreaking havoc on your mouth. Water is the best way to stay hydrated—after working out, avoid those sweet and sugary beverages (as tempting as they may be).

One of the reasons people don’t floss regularly is because of time. Adding flossing definitely does add a few minutes to your day, which doesn’t seem like a lot, but when it boils down to jumping into bed at the end of a long day or taking the time to clean your gums, that bed sounds exceptionally more enjoyable.

Build flossing and dental health into your daily schedule so that it’s not something you dread, but rather, something you accept. Establish a time that you’re going to be getting ready for bed every night, and plan it for when you’re not going to be so exhausted that you rush or skip the flossing altogether. If you want to be in bed by 10pm, for example, start your bedtime routine at 9:30—and stick to it. Stopping that episode of Netflix or putting that book down or sending out some last-minute emails can be very tempting, but try your hardest to make a schedule that accounts for gum and overall dental health. By doing this, you’re putting your health first, which is one of the most important things you can do in order to make those other things in your life possible.

We pretty much all know that eating excessive amounts of sugar every day is not good. But there are more reasons as to why having the right diet is important, and especially for your gums. As an article from Harvard states, “A diet rich in vegetables and vegetable oils, fruits, legumes, nuts, and fatty fish not only provides all the essential nutrients, but it helps suppress inflammation.” By eating foods that diminish the risk of inflammation, you are actively working towards controlling the essence of gum disease. Besides your gums, all of the aforementioned foods are good for your cardiovascular health and overall well-being.

If you don’t smoke currently, keep it up. If you are a smoker, take this as your sign to do what you already know is the best thing for you. Of the many negative side effects from smoking, one of them is periodontitis, a serious gum disease. Smoking can put a person up to six times more likely to develop periodontitis than someone who doesn’t smoke.

It can be difficult to stay on top of scheduling dental appointments, especially if you strongly dislike (or even fear) going to the dentist. However, your dental appointments will end up likely being more frequent and more intense if you put off regular check-ups. Make an appointment for a dental cleaning twice a year, six months apart, for the best chance at preventative dental care. Getting to the root of a potential problem before it even begins sincerely beats the alternative of showing up when it’s too late.

Instead of hesitating on calling the dentist, make the right call and schedule with Dr. Mojgan Mazhari today. A leader in periodontal and dental care, Dr. Mazhari works with clients for teeth cleaning, preventing gum disease, cosmetic dentistry, and so much more. Call us to set up an appointment today—your gums will thank you.