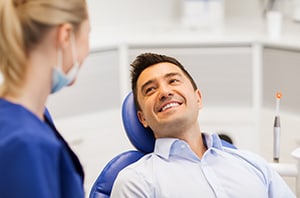 Known as the “silent disease,” most patients do not realize they have gum disease until it has advanced and begun to cause discomfort or noticeable damage. This can often result in the need for extensive periodontal therapy in order to restore dental health. Gum disease has also been proven to have a detrimental effect on overall health and well being.

Bleeding gums is a common sign of early gum disease, indicating that infection may be present and should be addressed as soon as possible. Dr. Mojgan Mazhari offers periodontal therapy for the signs and symptoms of gum disease to restore health and prevent further damage to either gum tissue or teeth. The gums support the teeth, and poor gum health can lead to loose teeth, shifting teeth, and even tooth loss. Gum disease remains a leading cause of tooth loss among adult patients today.

Bleeding gums often indicates that the gums are irritated or inflamed, most likely as a result of plaque building up along the gum line. This early stage of gum disease is known as gingivitis and should be addressed as soon as possible to avoid further progression of periodontal disease. There are other reasons for bleeding gums, including:

Dr. Mazhari routinely screens for gum disease during preventive care visits in our Alexandria dentist office. It is recommended that you visit with us for routine care at least twice a year to maintain your best smile.

If you have noticed that your gums bleed during routine tooth brushing or eating, mention this during your visits to ensure proper diagnosis and treatment, or schedule a visit so that Dr. Mazhari can address gum disease before it progresses.